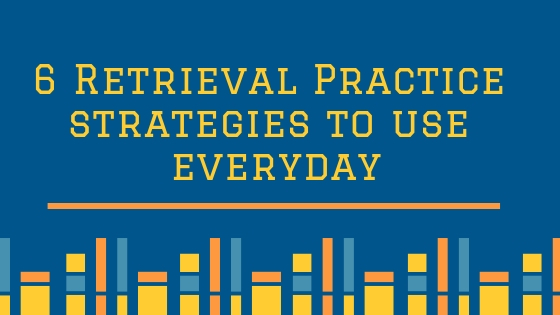 My last post showed the research base for the benefits of the testing effect, more appropriately referred to as ‘retrieval practice’. There is a vast wealth of resources now available to teachers that can aid their use of retrieval practice in the classroom. Building on a recent paper by Firth et al (2017), here are six flexible retrieval practice strategies I try and use nearly everyday. I’ve seen first hand the impact on learning that constant, consistent recall of key knowledge can have on outcomes through the use of these.

This is taken from Teach Like a Champion by Doug Lemov (2010). In its simplest form, it is a starter activity that recalls learning from previous lessons. The learning might be from yesterday, a week ago, a month ago, or even from the very beginning of the year. The sort of questions included in a ‘Do Now’ should be competed independently with minimal support.

In my Maths lessons, this looks like a 5 or 6 question screen with a five-minute timer. I include a question on place value, the four operations, fractions and other key learning we might have recently covered. If I notice that pupils have struggled with a question in the lesson and eventually got it, I might include a similar one in the ‘Do Now’ activity the following day so that they can retrieve and practice that learning again. 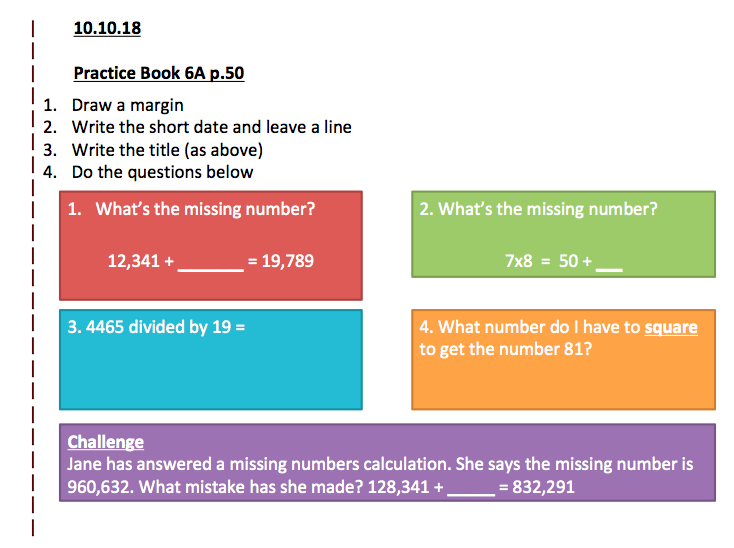 An example of a ‘Do Now’ from a Maths lesson earlier on in the year.

There are many different variations of this. Jo Payne and Mel Scott talk about their colleague who uses something very similar in her Maths lessons (Payne & Scott, 2017). They look very similar in English lessons but will cover sentence structure, punctuation, vocabulary and other key knowledge that is needed for writing.

Retrieval practice challenge grids have also come to my attention. I’m yet to use these but can see how they could be really effective. Here is a nice example from the Love to Teach blog.

The initial idea of this once again came from Teach Like a Champion (Lemov, 2010) and Tom Sherrington has written extensively about it. After developing a knowledge organiser for the topic, I plan a bank of questions that focus on the retrieval of key definitions, meanings of vocabulary words, ‘true’ or ‘false’ questions, dates and facts. If there’s a spare three minutes at the end of a lesson I will ask pupils a question that I’ve stored. While pupils are moving around the school in a line, I’ll ask them these questions. When some pupils have left something in the next room and we’re waiting for them, I’ll ask these questions. Before we go home, I ask them. Any dead moment in school, I pounce on my pupils and check their knowledge. They LOVE this.

Personally, my pupils have no issue with me asking the same question everyday of the week to different people, they enjoy getting it right. One key aspect of this is that if I ask the question, for example, ‘how long did World War One last?’ and a pupils responds by saying ‘I don’t know’, I then bounce that question to someone else and ask the pupil who said ‘I don’t know’ to listen in. I then get that pupil who said ‘I don’t know’ to listen in and parrot what the other person has said. This means that every pupil finishes with the right answer. See Lemov (2010) for more on this.

This is an obvious one and has been written about a lot. There is a growing body of evidence to show that this is highly effective in Primary and Middle schools (Garner, 2018; McDaniel et al. 2011; Butler, 2010). Interestingly, in Primary and Middle schools particularly, providing ‘prompts’ aids young learners recall of knowledge they may have learnt in previous lessons. Research is suggesting that young pupils’ learning in particular could be hindered if prompts and scaffolds are not provided during quizzes (Karpicke et al. 2014; Smith et al. (2016).

I like to mix this up as much as I can and make sure it doesn’t look the same each time. It’s really important that these are low stakes and fun. I do everything possible to not put pressure on pupils to get high scores. Here’s a few different ways I do this:

This arguably doesn’t test individual recall. However, I encourage groups to discuss answers if the questions are multiple choice; I like doing this at the beginning of a topic. It puts less pressure on them in the early stages of their learning.

I make flashcards with answers on the back and hand them out to pairs. They then ask each other questions and check their understanding. If there is time, I then get them to make their own and test other pairs.

This is straightforward: prepare a short, eight to ten question quiz that pupils answer individually. Since it’s low stakes, I don’t keep a record of scores but I’ll make a note of who got a really score and make sure I speak to them about it or give them an extra activity.

A note on responding to quizzes:

I do everything I can to try and help pupils to learn the knowledge that they get wrong in the quizzes we do. Like I mentioned in my previous post, the ‘test’ that they go through is a good thing and by getting things wrong, it means that their learning will be better long term. I do this in a variety of ways. I sometimes give them something to read; I might sit with them briefly and go over the things they got wrong while others are working; I might even give them different activities entirely, depending on what they got wrong.

Early on in lessons, I do everything I can to make sure I go over what we learned the day before. I try and mix this up and use a range of methods to do it. These primarily fall into three categories: sorting, linking and comparing.

When comparing, this might end in writing a short response to a question on a whiteboard. For example: write down three differences between life in Athens and life in Sparta for the average Greek.

I first learned about this listening to Jenny Gonzales on the Cult of Pedagogy when she interviewed Pooja Argawal. The first time I tried this it had very limited success. This was to do with the fact that I gave my pupils a variety of coloured pens and a blank sheet of paper. They got a bit giddy about the pens and became very scared of the empty page. I realised that by putting the very beginnings of a mind map with a few prompts on to the page, this massively aided retrieval (which is linked to what I said earlier). Doing these twice during a topic of six weeks was hugely beneficial for me to see how much pupils could remember about the topic but in addition, helped them see how much they’d learned. I often kept old ones to show them how much they’d improved.

This strategy is really flexible because you can scaffold the support you give by adding prompt questions, pictures or vocabulary words to help children recall. It is also really easy to plan and resource.

There are two approaches I use if I use discussions specifically for retrieval practice: articulating explanations and applying knowledge to extend thinking.

Early on in a lesson, I try and get pupils to think carefully about using accurate definitions for key terms, using vocabulary words or phrases in sentences or clarifying learning from previous lessons by working in pairs or groups. I encourage them to write it down as a group and then feedback. I set this up in different ways. One way that tends to ensure that all pupils learn to speak clearly using their newly learned vocabulary is by giving group roles (for example: scribe, leader, speaker, grammarian). Each one will work specifically in role. I often choose the ‘speaker’ to be a pupil who is very shy or struggles with using new vocabulary accurately. By doing retrieval practice in this way, it enables pupils who may have learned the content but lack confidence the opportunity to speak up and be heard. After all, If they’ve learned it but don’t have the confidence to say it, what’s the point? (furthermore, if they can’t say it, they can’t write it).

This is similar to the sorting, linking and comparing activities above but the focus is on improving their speaking skills. These sort of tasks are very open ended and will build on knowledge I know they already know. For example, if I know that in a topic on World War One my pupils know the four main causes, I might ask them to rank how significant they were and be ready to explain why they think this (Sorting) . Within the same topic, I might also get them to compare life in the trenches for German soldiers and British soldiers and then articulate why they think this (comparing). Beyond this, I might get them to link their knowledge of World War One to their knowledge of other wars and battles and consider the differences between them.

A Note on discussions:

As often as possible, I have three conditions for discussions. First, those involved in the discussion are well trained in active listening and speaking and have specific roles. This is essential; otherwise, pupils never get the most out of discussion time. Next, they use key vocabulary and begin with discussion phrases that I give them. I sometimes grade their responses to each other based on whether they are using these scaffolds. Finally, I try to end each discussion time with writing. By this time, they’ve hopefully retrieved key information, spoken in high quality English and have heard other ideas. The form of the writing might be as short as a well-crafted sentence. Or, if might form part of their planning for a later piece of writing.

So, these are the six flexible strategies that are working for me. Below are some blogs that i’ve read in the  past that have been helpful when thinking about how I use retrieval practice in my classroom.

Is there any strategies you use that i’ve not mentioned here?

Firth, J, Smith, MA, Harvard, B, Boxer, A (2017) Assessment as Learning: The role of retrieval practice in the classroom. Impact, Online Access

Garner SJ. (2018) Retrieval practice in use: Multiple-choice testing in the primary classroom. Impact2:17

That Boy Can Teach

View all posts by Mr. Burns

5 thoughts on “6 retrieval practice strategies to use everyday”

Leave a Reply to Not putting pressure on our Year 6 pupils. – How then should we teach? Cancel reply